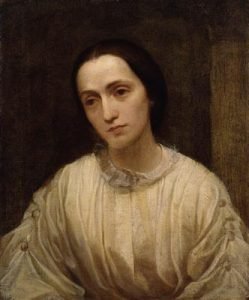 Julia’s work was contentious in her lifetime, earning criticism as well as praise for her unusual soft focus and the dramatic quality of her illustrative images.

She is now considered to be one of the most important portraitists of the nineteenth century.

She was born in Calcutta, India, to glamorous socialite parents. Major James Pattle was stationed with the East India Company and her mother, Adeline Marie (nee de l’Etang) was a French aristocrat.

Julia was the fourth of ten children and one of seven sisters to survive into adulthood. The whole Pattle clan, nicknamed the ‘Holy Sisterhood’ were known for their charm and wit and, in most cases, for their exceptional beauty. All were sent to France as children, to live with their maternal grandmother and to be educated.

During a visit to the Cape of Good Hope in South Africa, to recuperate from illness, she met the astronomer Sir John Herschel, who became a close friend and who sparked her interest in the early photographic methods.

In the same visit she also met the man who was destined to become her husband, Charles Hay Cameron, a lawyer twenty years her senior. Together they raised 11 children, five of their own, five orphans and an Irish girl whom Julia found begging on Putney Heath and who was to become her muse.

When Charles retired from public life in India they moved back to England, joining her elder sister Sara’s remarkable literary and artistic salon of poets, writers and painters, including GF Watts and Alfred Tennyson, both of whom became lifelong friends.

In 1860 Julia visited Tennyson at Freshwater in the Isle of Wight, fell in love with the place and immediately moved there, to a house she named Dimbola after the plantations Charles owned in Sri Lanka. Before long she had created a similar salon to her sister’s, thereafter known as the Freshwater Circle. They stayed until 1875 when they retired to their tea estates in Sri Lanka, where Julia died four years later.

Although Julia had experimented with handmade daguerrotypes, she did not take photographs until she was given her own camera in 1863 and was immediately smitten.

After realising the potential of such a new and exciting art form, Julia cleared out a chicken coop and converted it into studio space that she called the Glasshouse. In her unfinished memoir Annals of My Glasshouse, she wrote: ‘I began with no knowledge of the art… I did not know where to place my dark box, how to focus my sitter, and my first picture I effaced to my consternation by rubbing my hand over the filmy side of the glass.’

By the following year she had collated a portfolio of prints, exhibited some and joined the Photographic Society of London. In 1865, she held her first solo exhibition, generating demand for her prints which were shown throughout Europe.

In the same year, the South Kensington Museum, now the Victoria & Albert Museum, purchased a large number of her prints and their collection remains the largest worldwide. Many are available to view on their website.

Julia worked furiously, creating more than 900 prints in the twelve years she worked in England. Many were portraits of the great men and women of the day, portraits that were very different to the work of other photographers in their intense close up and soft focus.

Later she experimented with dramatic narrative, favouring myth and legend in series of works that culminated in the twelve images she produced to illustrate Tennyson’s Arthurian poems The Idylls of the King.